"Hello, Brother": Who is to blame for the poor quality of the film?

The planning of "Hello, Brother" was obviously inspired by "Hello, Li Huanying". The story describes the male protagonist played by Chang Yuan, who accidentally traveled back to the 1980s to help his young father Wei Xiang and his mother Ma Li get along. Demented father reshapes relationship. The comedy core of the story may also be borrowed from a line in "Charlotte Trouble": "From now on, we will discuss each other, I will call you brother, you call me dad." This kind of "ethical stalk" Even if the baggage is a bit old-fashioned, it can still please the audience when it is done well, at least it makes the comedy of the film very lively.

"Hello, Li Huanying" has the top box office revenue of 5.4 billion yuan. Even if the revenue of "Hello, Brother" is only a fraction of the former, it is already a big profit. Not to mention that the performances of Ma Li and Chang Yuan in "Walking on the Moon" just now also left a good impression on the audience. In addition, Mr. Wei Xiang's reputation for "This Killer Is Not Too Calm" at the beginning of the year, plus the Mid-Autumn Festival family carnival. It can be said that the cast and subject matter of this film are quite exciting.

Of course, there is also a saying that the creation period of this film actually overlaps with that of "Hello, Li Huanying". However, this film, which received the Dragon Logo in Radio and Television last year, was only released at this time this year. In addition to the impact of the epidemic, there must be accurate commercial calculations. Whether it is similar to other films is not the original sin, but whether it looks good or not is the evaluation criterion. 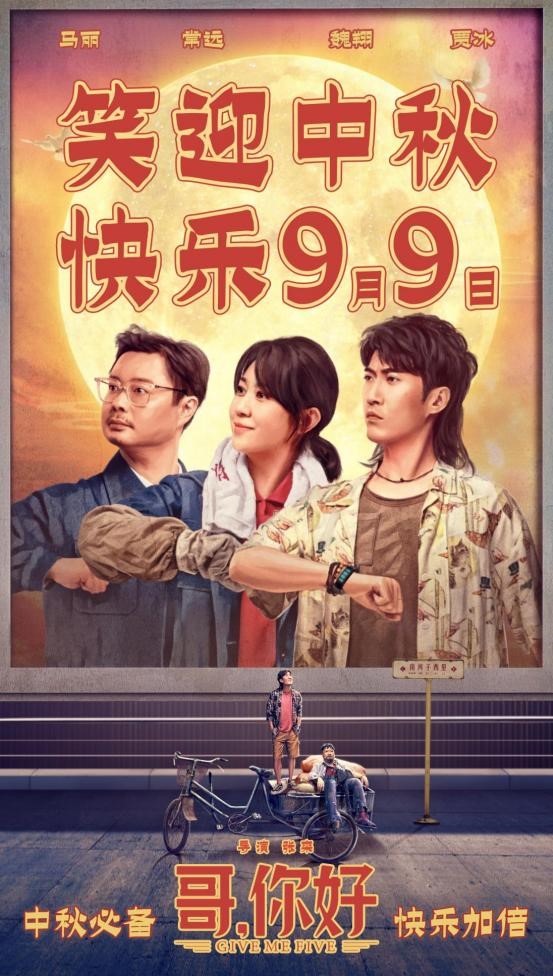 Just unpacking the gift box that is beautifully advertised on the surface, I am afraid that viewers who have watched the film will be quite disappointed with the "moon cakes" inside. All the publicity behind the scenes will eventually turn into an unsatisfactory viewing experience. Even the term "content" can't describe what went wrong with the film. It is likely that most of the audience's dissatisfaction will attribute the poor quality of the film to the starring Chang Yuan and even "Happy Twist". The confidence just ignited in "Walking on the Moon" was poured down by a basin of cold water.

But this film is actually not directly related to "Happy Twist". Looking at the title, you can see that although several leading actors are the backbone of "Happy Twist" - plus the help of Teacher Jia Bing, "Happy Twist" did not participate in the actual production. The largest investment is "Wanda Films", which still occupied the pole position in the theater rankings in the past few years, while the actual creator is "Mokexing Films". To put it bluntly, as the main creator of the film, "Mokexing" co-funded the company "Wanda" with the most money, and invited several "Happy Twist" actors, taking advantage of their popularity, which is still in the comedy boom, to use some of them. The idea that overlapped with "Hello, Li Huanying" made a film that made a steady profit from the perspective of business planning.

In 2019, "Mokexing Pictures" helped the starring teacher Yu Qian win the Best Actor Award at the Macau International Film Festival with a "Teacher Good". And that film is also said to have won a box office of 350 million yuan with an investment of about 10 million yuan. It can be said that it was a great commercial success, and it is not behind in word of mouth. The director of that film, whose real name is Zhang Heluan, was called "Zhang Luan" when he was directing, and is said to have originally been a cross talk actor of Deyun Club. In the film "Hello, Brother", although "Mokexing" no longer attracted the actors of Nader Cloud Club, it has become an artist of "Happy Twist". It seems that there are similar operations in the business path. With the popularity of comedians as the basis for publicity, the director of the film is also Zhang Luan. 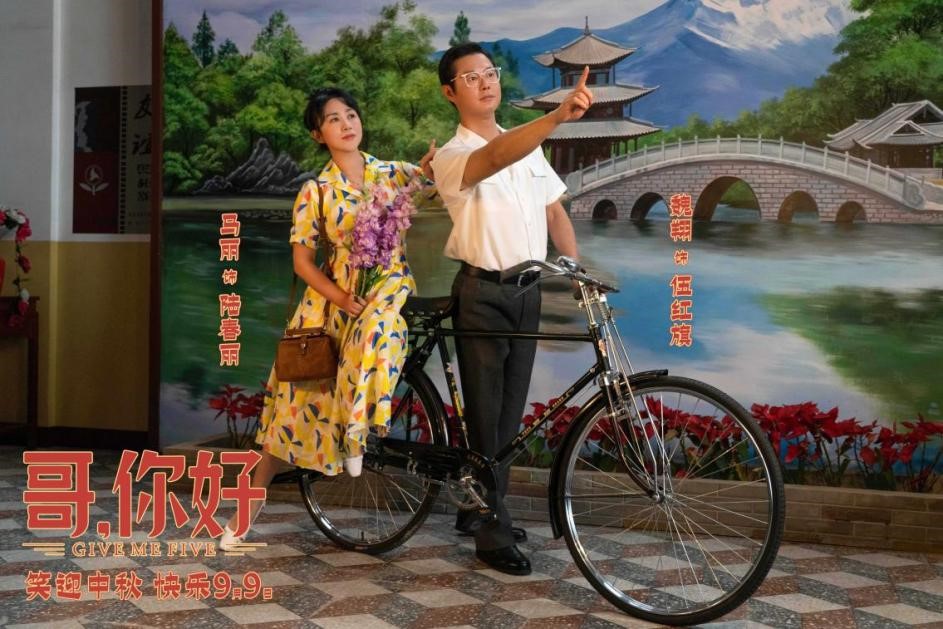 Although the industrial background of the creation of these films does not need to be understood in detail by the audience, just like going to a restaurant without knowing where to buy the ingredients, if the dishes are not delicious, or even eat food poisoning, then they will find out Which link went wrong and who is the initiator seems to be a very reasonable consumer appeal.

It's a pity that a movie ticket doesn't seem to be about rights protection. No matter how dissatisfied the audience is, it's nothing more than going out of the theater and scolding, and seeing similar actors in the future, they just avoid watching. And this time to tell the truth, the quality of the film is good or bad, and it is not the actors who dominate. A few comedians are just doing their best to act according to the script. The biggest creative responsibility behind it is still the screenwriter, director and producer. 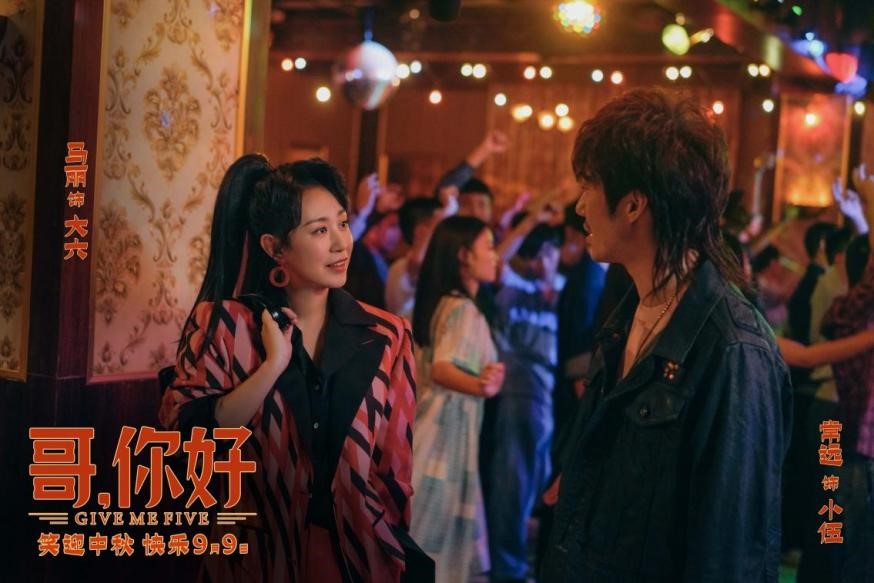 From the first minute, the film story of "Hello, Brother" seems to have no new original ideas, and it basically falls into a cliché. Before the characters appeared, the narration introduced the relationship between the characters clearly to the audience, and seemed to be worried that everyone would have any difficulty in understanding the settings of the "dementia" father and the "career failure" son. But in fact, in the ten minutes after the film, whether it is the story of the father comatose in bed or the story of the son traveling back to the past, there is nothing new to say. Any details that make you feel moving or heart-wrenching. These problems are not due to Chang Yuan's poor performance, or Wei Xiang's too few scenes. From the perspective of the story and the script, there is no special "family point" that makes people feel that it is enough to support the thickness of the father-son relationship.

And the plot after the crossing is also unfolding in a way that the water waves are unhappy. The director seems to be trying to create a laugh, so the male protagonist accidentally falls into the women's bathroom. This comedy situation, which has been used 800 times, is used again embarrassingly. At the same time, let the supporting actors chat with each other, so that the audience can understand the character setting of the heroine Ma Li's "female man". This screenwriting method seems to be the same as Chang Yuan's appearance at the beginning. After Chang Yuan's accidental crossing, the encounter between his parents was destroyed, and it even endangered their love and their own birth. This old stalk not only overlaps with "Hello, Li Huanying", but also starts from the classic American film "Back to the Future". , basically following the 40-year-old setting bridge. This all shows that the screenwriter, director or producer has no ambitions, and seems to think that it is enough to make the story like this. For the audience, it is nothing more than a cliché that is repeated again and again. 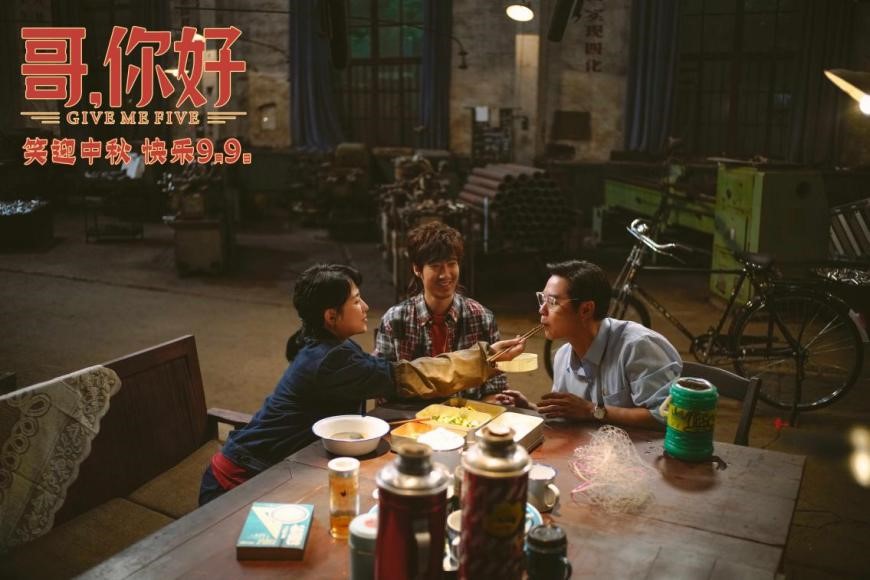 If there are still some bright spots in the film, then the scenes that Chang Yuan traveled back several times after that seem to have found some cultural characteristics of the film's story: a cultural imagination that expresses the industrial construction of the old Northeast, and the efforts of the workers and masters are actually not enough. In the wonderful life, create a touch of elegance and romance. In the old-fashioned dance hall, in order to maintain the dignity of the workers and the future of the factory, they fought against the emerging capitalist Jia Bing; it also included creating romantic love ceremonies and tokens in the workshop, or gaining the respect of the workers in the technical training. and sure.

These bridges actually have some contrived parts, and maybe some comedy points will make people quite deliberate. For example, a ring that can be enlarged with a file, but finally had to use a hydraulic press. Or in order to show the magical technical ability, the "blind welding" competition bridge was produced. But at least it's creative. Perhaps the problem is that the passages are too scattered and lack internal connection. For example, in the scene where Jia Bing met Chang Yuan last time, "Goodbye Sun Wukong" may be the funniest paragraph in the whole film, but if it is deleted, it seems that there is no loss in the connection between the front and rear of the story, so it can only be said that the film fragment is sketchy The paragraph design is too obvious and lacks the inner emotion and the front and back mechanism of the story. 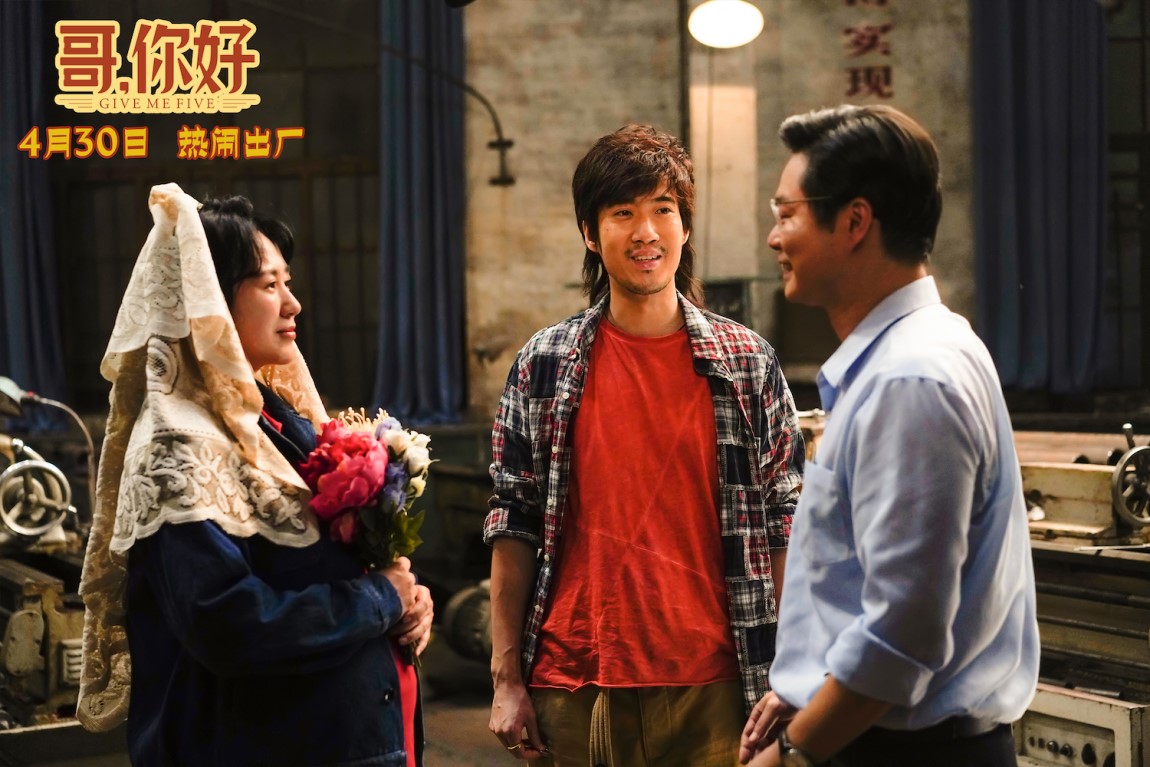 "Hello, Brother" stills. Due to multiple schedule adjustments, the schedule times on many materials of the film are different. But the filmmakers did not update the stills

These deficiencies may just make the film look lacking in highlights, but the design near the end makes the audience look very big, and may even be annoyed. When the film was nearing the end and Chang Yuan had to face the most difficult emotional choice as the protagonist, the director seemed to want him to choose between "protecting his parents or protecting himself". However, the emotional foreshadowing required for this design seems to far exceed the existing creative ability of the director, so the story bluntly becomes the heroine facing production difficulties. "The ethical issue. After that, Chang Yuan's choice of whether to sacrifice himself to wake up his father and save his mother, the story is very confusing - maybe some of the more blunt plots were edited at the end, making the plot suddenly more blunt.

The final ending, like a sudden fall from the air, evolved into Chang Yuan's demented father when he got married, as if he saw the reborn mother again. In a beautiful scene that seems to be a family reunion, the story of the film is like a wanted criminal being chased by the police, hurriedly escaped onto the ending train, and suddenly disappeared into the distance inexplicably. 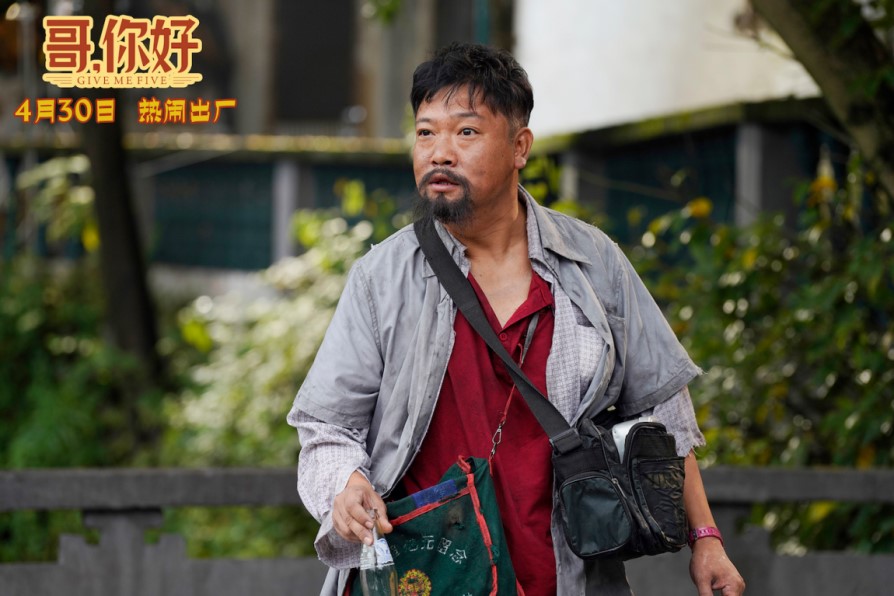 Walking out of the theater, one can't help but think of the most glorious 90s of Hong Kong movies in the last century. Due to the vigorous development of the film market, many low-budget films are released quickly. With one or two stars starring, most of the stories are similar or learn from each other, which will soon attract audiences to the theater. Even if the quality lacks novelty, it is still a commercial success. At that time, the box office of the movie was only calculated in tens of millions of yuan, unlike today's box office revenue of over 100 million yuan.

Are you wrong? It doesn't seem right either. However, the audience will gradually feel more and more that these films are not worth the price, which will lead to a lack of confidence in the film and television industry and become an important reason for the collapse of the market in the future.

The box office results of "Hello, Brother" don't look too bad. Whether it is a bad movie in terms of quality, it is not one person who has the final say, everyone has different opinions. But who is paying for it, and who is responsible for the quality of the final film? It may not be the specific responsibility of a certain person, but it seems that the people involved in the creation should all reflect on themselves, what have you produced.