Thinking back then | 20 years after "The Blue Door", what kind of adult have you become

"Blue Door" debuted in the Director's Fortnight at the 2002 Cannes Film Festival, and was nominated for the Best Asian Film at the Hong Kong Film Awards that year. This film, which was born in the past, created a trend of "small and fresh" Taiwanese youth films in the future. "Asia Weekly" praised the film as "innocent but not naive, sweet but not out of touch with reality".

People who love this film relish the classic monologue at the end of the film - "Three years, five years, or even longer, what kind of adults will we become? It's a physical education teacher, It's still my mother. Although I close my eyes and can't see myself, I can see you."

Twenty years later, what kind of adults have the young boys and girls grown into? Maybe youth has become a distant and sad dream, but those who remember this movie must have seen themselves in it.

Before the new century, new Taiwanese films also shot youth films, and even the soft Taiwanese had soft details, but such masters as Hou Hsiao-hsien and Yang Dechang would not only focus on the content of youth. The youth in "The People", "Love in the Wind and Dust" and "Guling Street Teenage Murder Case", while cherishing personal growth, it is more important to express and look back on the more profound changes of the times.

The briskness of "Blue Door" is that even if it touches the energy of campus bullying, teacher-student affection, sexual orientation, etc. with potentially sharp topics, it still lightly embellishes them on the beach, summer, swimming pool and other bright lights. Among the elements, under the repeated short lines of the second middle school, the devious emotions of not daring to confess and secretly competing with oneself, and the throbbing of peeping from a distance under the telephoto lens, it depicts a state that is infinitely close to the essence of youth. . 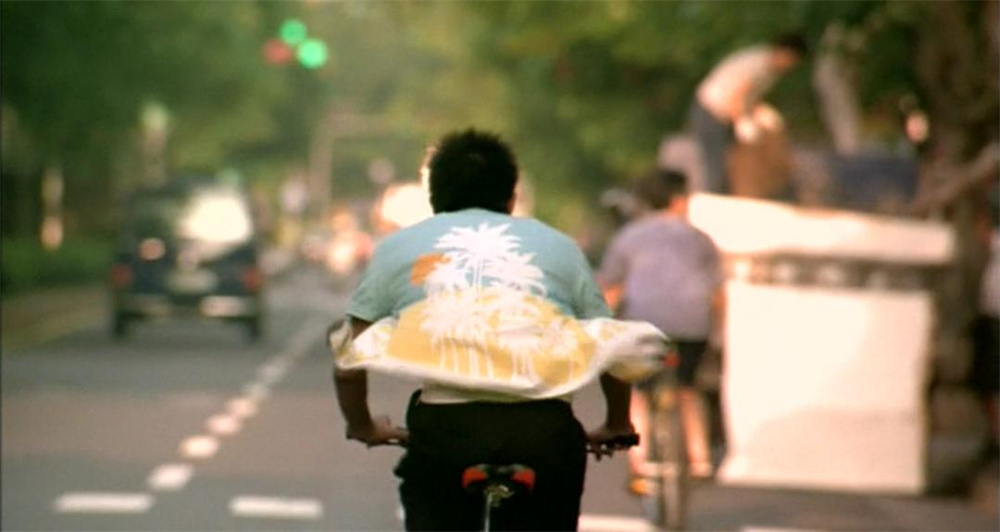 There is no "dog blood" element that is standard in later youth films, and there is not even a background set by a scumbag. The high school students in the film are not confused about the future of studying and further education. .

At the beginning of the film, two girls close their eyes on the playground and imagine what Prince Charming looks like. The girl's mind is like the fragrance emanating from the green grass under the sun, some people are clear, some people are suddenly. 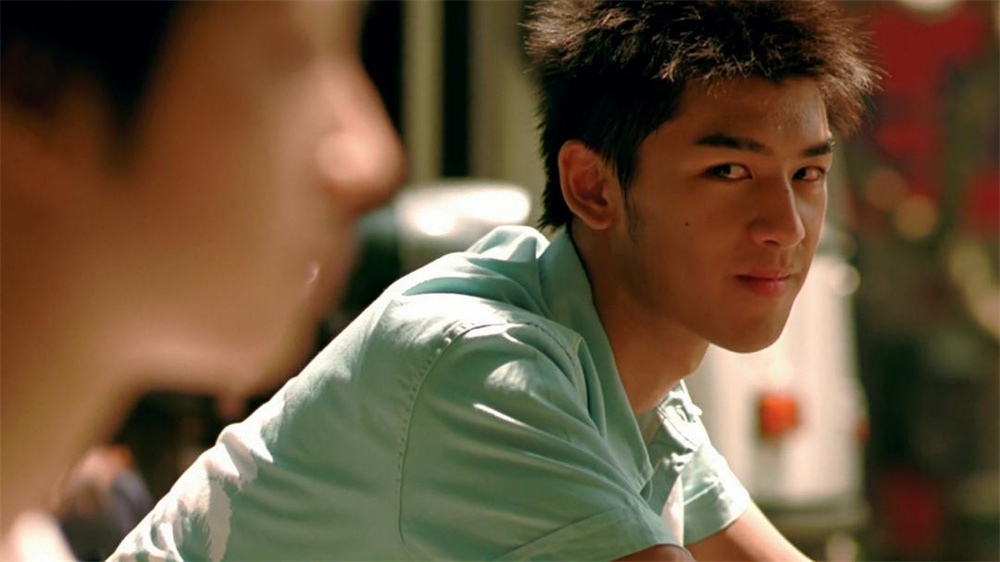 Lin Yuezhen (played by Liang Youlin) falls in love with Zhang Shihao (played by Chen Bolin), a boy on the school swimming team. He is handsome and plays the guitar well. Lin Yuezhen hopes that he can be her husband. But she didn't dare to talk to him. Every time she just looked at him from a distance, picked up the pen that Zhang Shihao had used, and secretly wrote his name over and over in the notebook.

Zhang Shihao liked Meng Kerou so much that when he accidentally received a love letter from Lin Yuezhen to him in Meng Kerou's name, he was elated to find this excuse for Meng Kerou, believing that there was no such person as "Lin Yuezhen", which made Meng Kerou difficult to explain. 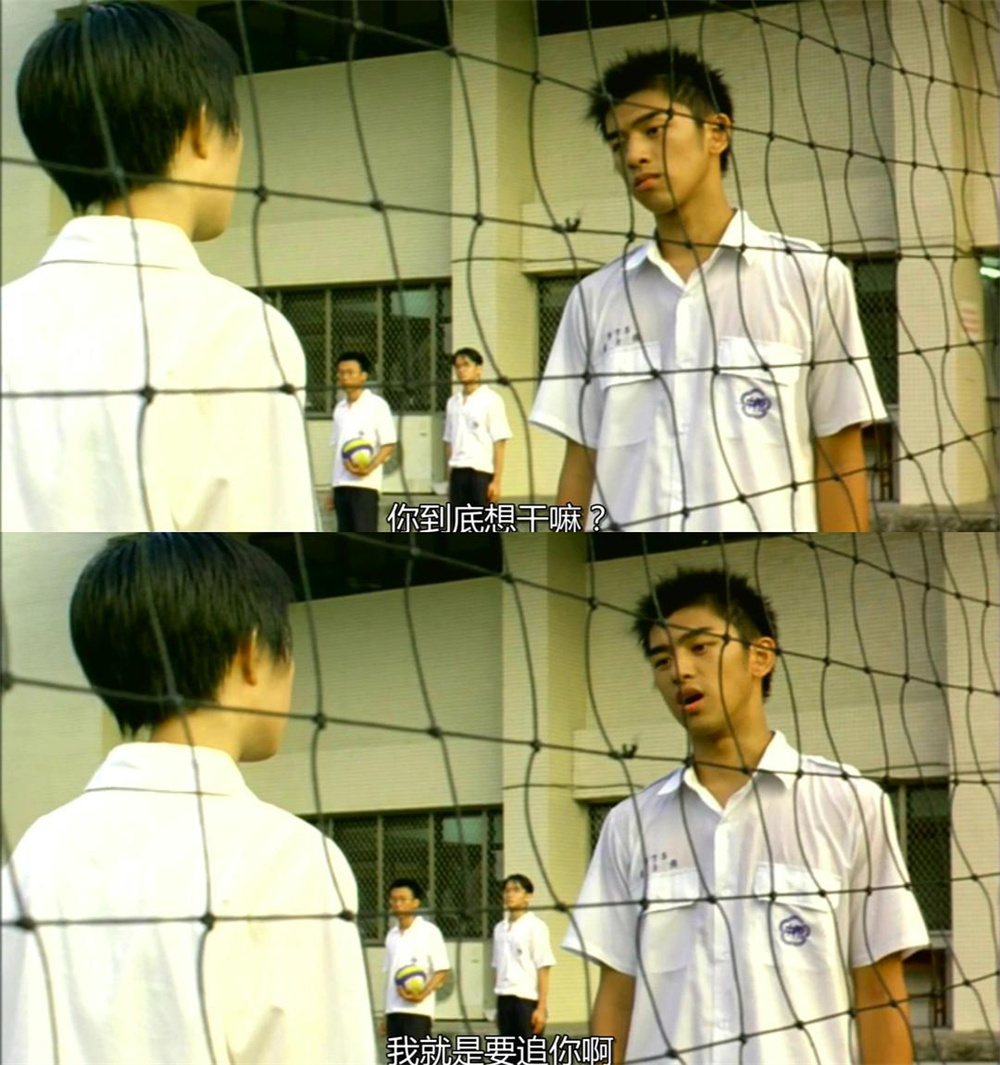 "I just want to chase you"

He, Zhang Shihao, Scorpio, blood type O, swimming team, guitar club, everyone who has seen the movie thinks that he is really good.

Meng Kerou probably felt the same way, but he just couldn't like him. Although she asked Zhang Shihao to kiss her, just like she asked the physical education teacher to kiss her, it was so abrupt that it made people feel a little helpless. She wanted to kiss a boy to find out if she really didn't have feelings for a boy. Just from the scratches on the hard handwriting of "I am a girl, I love boys" on the wall, you can see how confused and angry she is when she plays cards out of common sense. 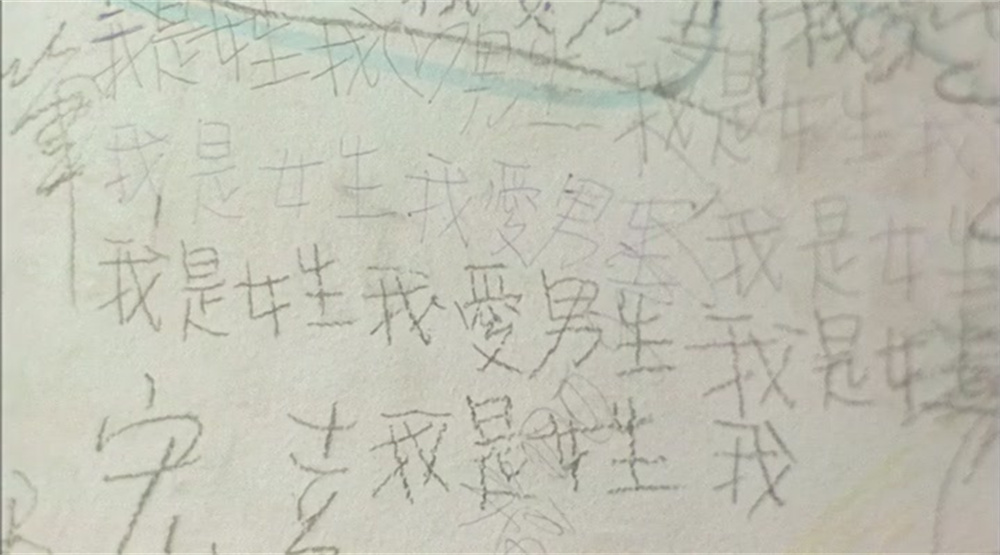 Yes, the person she likes is Lin Yuezhen. Zhang Shihao exchanged this secret with his "pee fork".

They kissed, cautiously, tilting their heads sideways, and in the process of approaching, they hesitated and dodged and made up their minds. Then no. Then, the boy asked over and over again, "So we broke up?" 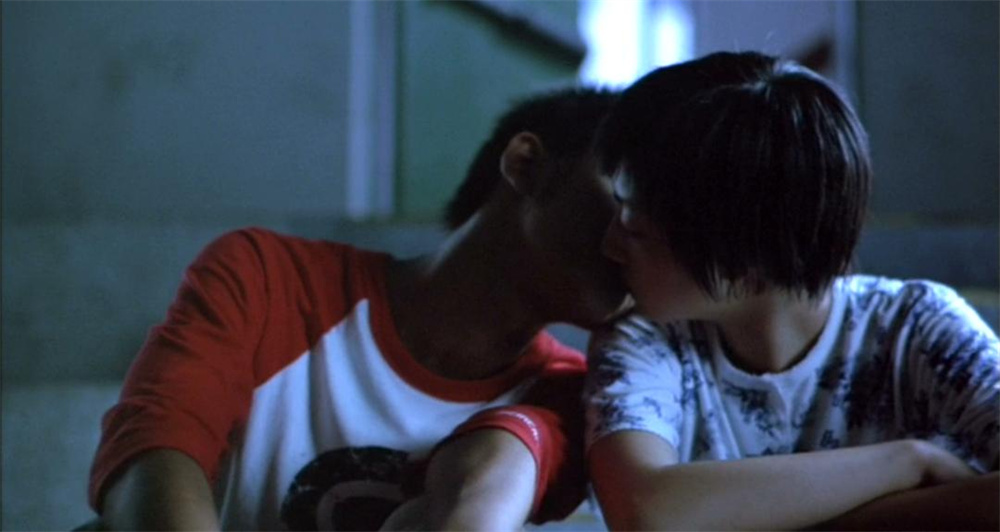 After Zhang Shihao and Meng Kerou "break up", Lin Yuezhen still wrote Zhang Shihao's name in the notebook as always. She once "superstitious" that the boy would fall in love with her after the book was full, but finally one day, she lost everything about him, and the handwriting on the notebook became Kimura Takuya. She also received a kiss from her best friend, and she couldn't help but hide her unspoken love in her kiss. She ran away quietly, pretending to be calm and playing with the others. 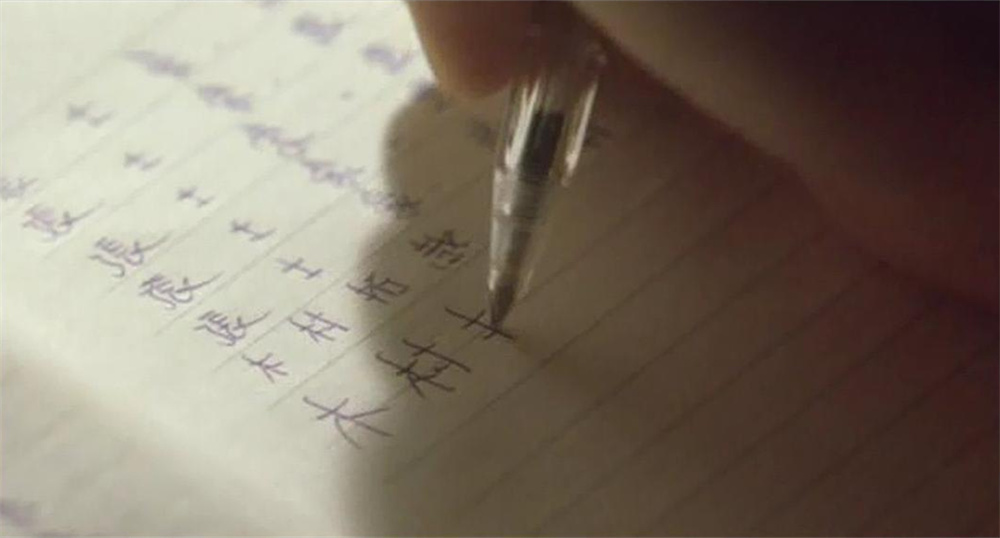 Takuya Kimura on the book

In the end, Meng Kerou didn't watch Zhang Shihao's swimming competition. Zhang Shihao practiced hard every day, but he still didn't win the championship that would make him look handsome and help him go to school. After the game, he saw Meng Kerou, "I'm so unwilling, the summer is over like this, as if nothing has been done."

And youth is really like this. Looking back at it as an adult, all the little things that are heart-wrenching happened in the summer when nothing seemed to happen, in the process of self-affirmation and self-digestion that kept asking questions. When everything is accepted and put in place properly, we will grow into those "adults".

In the movies that belong to youth, it is the sad smiling faces of boys and girls after injury. No matter how sad they are, there will still be sunshine on their faces. 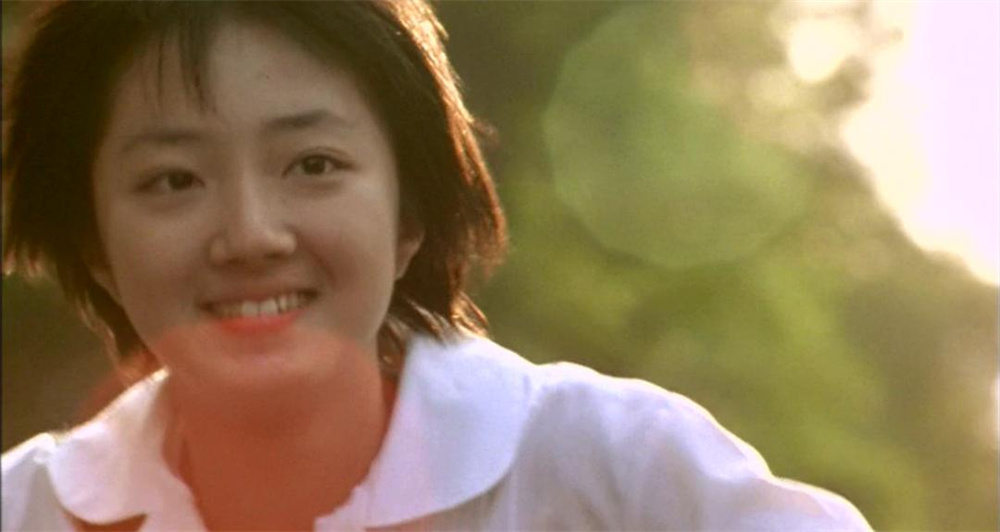 The physical education teacher will also be quietly delighted that the mother "survived" unknowingly to the day when she "survives". That day will come sooner or later. I once thought that three or five years later would be a distant and unknowable future. When I was young, I could not see myself when I closed my eyes. Now, when you close your eyes, will you still want to see what you once looked like?

I remember watching "The Blue Door" earlier, it will magnify Meng Kerou's tangle, the confusion of whether he loves boys or girls, like an unbreakable shackle, as if pointing to some ultimate proposition. Looking at it again in a few years, I don't think that sexual conflict has such a particularly important weight in this mind.

These are three loves with completely different tastes. The gray area that must be passed through to the adult world is smeared into a leisurely blue. 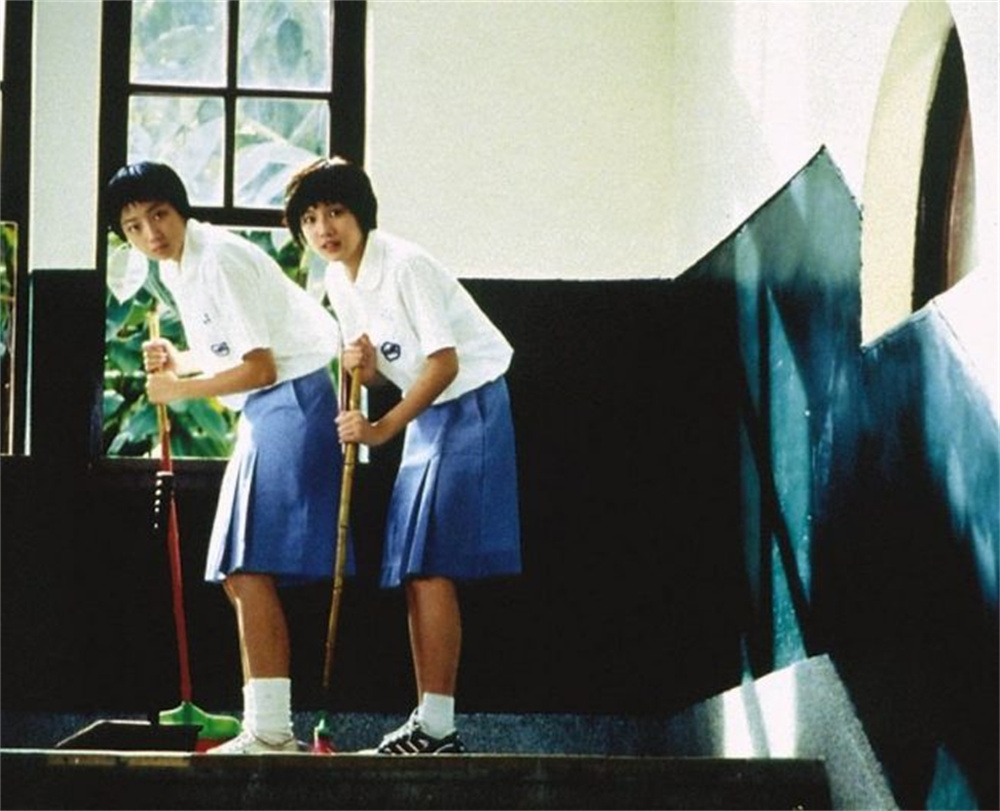 Lin Yuezhen's feelings for Zhang Shihao are pink ashes, which are built up on the girl's fantasy. The private things and even the garbage collected in the dark are called shining treasures in the mind of a crush. Carefully sent out a friend to test, and watched helplessly as his friend became the light in the eyes of his sweetheart. Adolescent girls add countless dramas to their hearts, making people unpredictable, and most of the time they die without a problem. 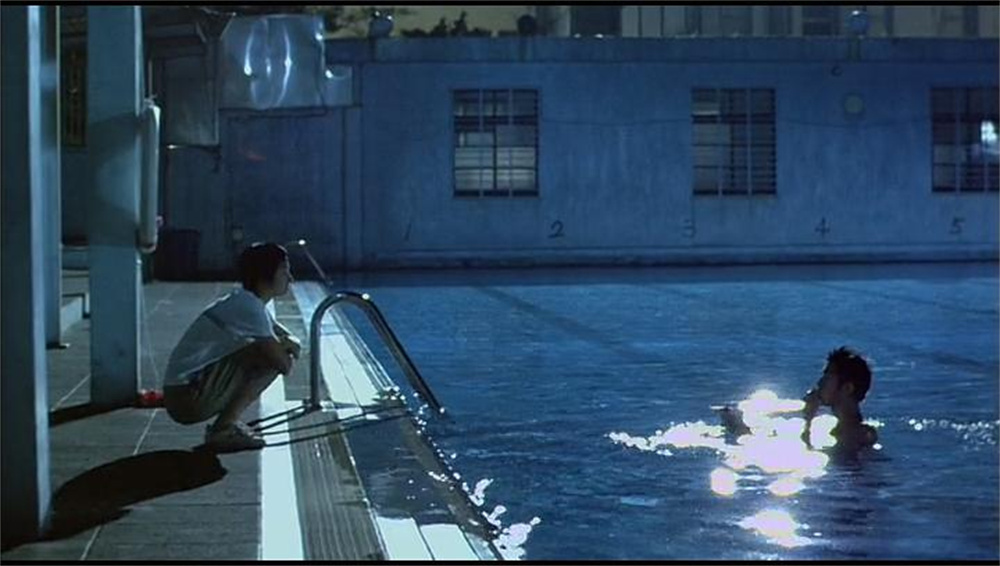 look at each other

Zhang Shihao was warm and bitter towards Meng Kerou. He was open and unconcealed, and put all his confidence and frankness on his face, but he fell in love with a girl who was almost impossible to fall in love with him, so he thought that what he got, he suddenly became lost. "If one day you find out that you like boys, you must be the first to tell me." This is the humble and sincere thought that many people have left for themselves during adolescence, and it may not be related to gender. It can be replaced with, if one day you forget a certain hurt, let go of a certain obsession, or want to return to a certain place where you have left. Zhang Shihao's calm acceptance of helplessness and confidence to hold on to the bright and bright, is a hearty and hard to say after adulthood. 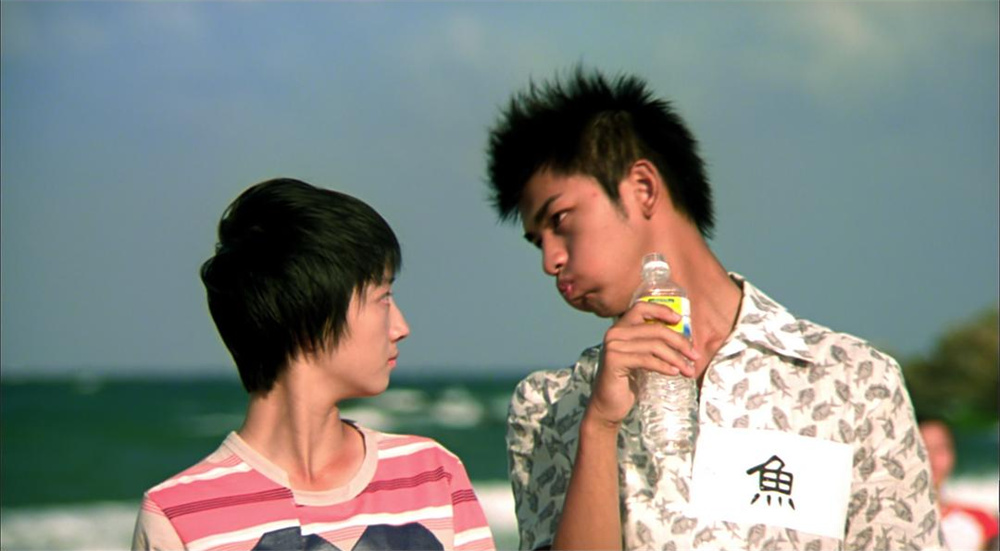 Meng Kerou's secret love for her best friend Lin Yuezhen is a sour and sharp pain. On the one hand, one has to face the incompatibility between oneself and the established rules of the world, and constantly try to test the boundaries and discipline oneself in a self-perceived way, which may also carry the possessiveness peculiar to adolescence, seeing that the mind of a good friend is entirely on others. I don't want my good friends to be taken away. She pushed the Yuezhen she liked to the little boy she liked sourly, and on the one hand, she also faced herself in the free appearance of Xiaoshi's bright "happy little boy".

Yang Dechang once said, "There are only two types of films in Taiwan - youth films and non-youth films." This sentence is enough to prove the weight of youth-themed genre films in Taiwanese films.

Before the release of "Blue Door", Taiwan experienced a short-lived upsurge in the Chinese-language film circle brought about by "Crouching Tiger, Hidden Dragon" in 2000. However, due to the decline of the film industry itself, it inevitably fell into a trough: the local film released in 2001. No film, no matter whether it is an art piece or a popular mass entertainment theme, has a box office of more than 1 million Taiwan dollars. In such an environment, Yi Zhiyan handed over his second feature film, bringing a new perspective to the Taiwan film market with a school youth story that was different at that time.

Last year, the Taiwan Film Critics Association selected the "20 Best Taiwanese Films of the 21st Century", and "Blue Door" beat "The Girl We Chased Together in Those Years" to occupy a seat for youth films. The jointly shortlisted films include "Lust and Caution", "Assassin Nie Yinniang", "Sedek Bale" and other blockbuster masterpieces. When he came to the stage to receive the honor, director Yi Zhiyan, who was not very prolific, said that he couldn't tell whether "The Blue Door" was his own child or his youth at all. "Perhaps the two refer to each other and cannot be separated. So when outsiders say that "The Blue Door" is sweet, I think loneliness is bitter at all. Saying that "The Blue Door" is too simple, I feel that it is more difficult to simplify and not simplify."

the end of the movie

At that time, Gui Lunmei and Chen Bolin had not yet become popular youth idols, and it is even difficult to say that they really presented something called "acting" in this film. But it is that kind of natural nature, which has become the rational and comfortable that many youth films in the future cannot match.

Gui Lunmei once recalled that she became attached to this film because she had a quarrel with her boyfriend at the time one afternoon, and her face was very, very smelly. In that state, I met the assistant director who was looking for actors for "The Blue Door", which opened the later story.

In 2018, before the swimming pool of the High School Affiliated to Normal University was about to be demolished in the movie, Gui Lunmei watched an open-air movie with the audience by the pool, and posted on Weibo, "We used to spend hot summers here and did The most youthful dream."

You see, the summer that once thought nothing was done, there will always be something left. And what we leave behind is what kind of adults we become. 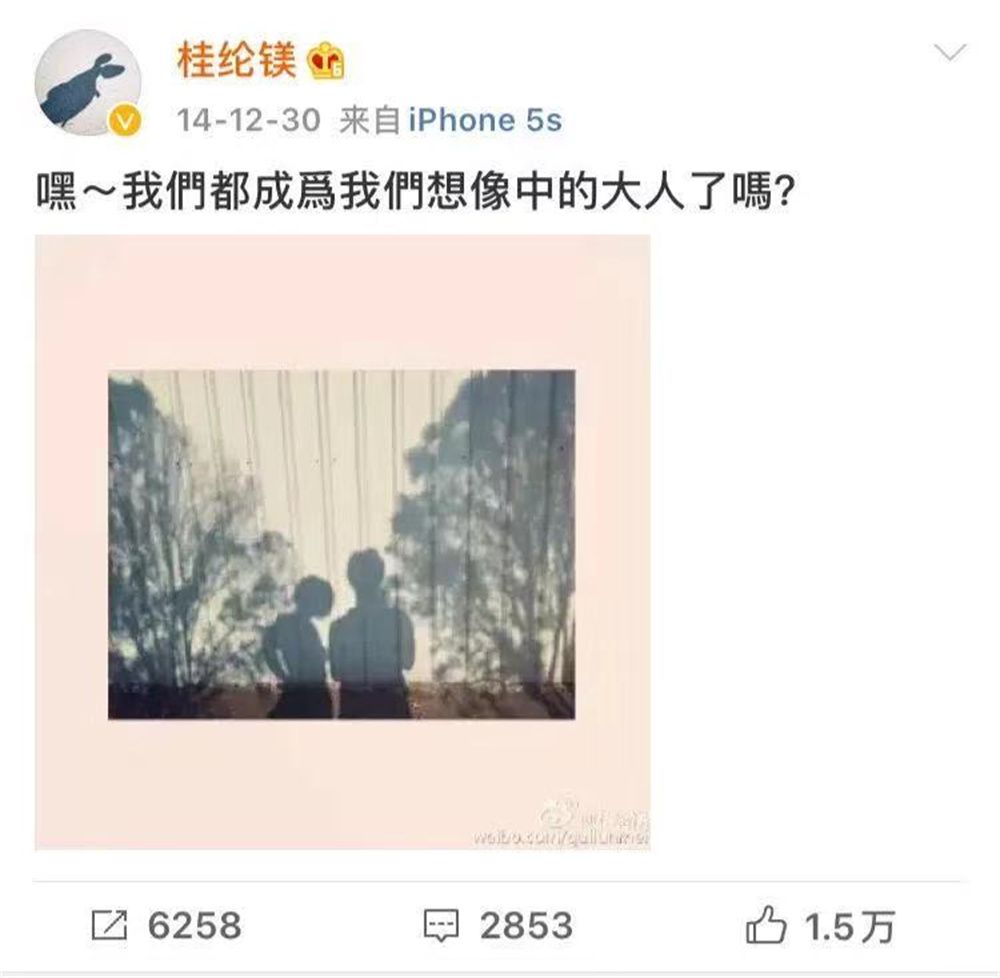