"Big Exam" has completed its big exam, providing new ideas for the creation of the main melody

The epidemic that ravaged China in early 2020 is a big test for the whole society and a big test for the national governance system and ability. In the past two or three years, there have been many film and television works reflecting this big test, with grand themes and serious styles. These film and television records are of course necessary and valuable, but there is no need to deny that audiences are more or less aesthetically fatigued with similar-style narratives, and the missionary color overwhelms the artistic presentation method, which may also cause audiences to resist.

In this context, the hit "Big Exam" is a bright spot. It is also a grand theme expression, but its entry point is both light and life-like: in two high schools in Jinhe County, Anhui Province, a group of post-00s children born in the SARS period are about to usher in a big test in their life— - The college entrance examination. The first to appear is Xueba Zhou Bowen (played by Hu Xianxu), a senior in Jinhe County No. 4 Middle School. He has a warm family. His mother, Zhao Shan (played by Yan Bingyan), runs a small restaurant. His mother is gentle and virtuous and works tirelessly. Father Zhou Meiren (played by Wang Xiao) has an honest personality, but he is lazy and lazy. He is a typical "laying flat". He likes playing games at home on weekdays, and when he goes out, he probably plays mahjong. 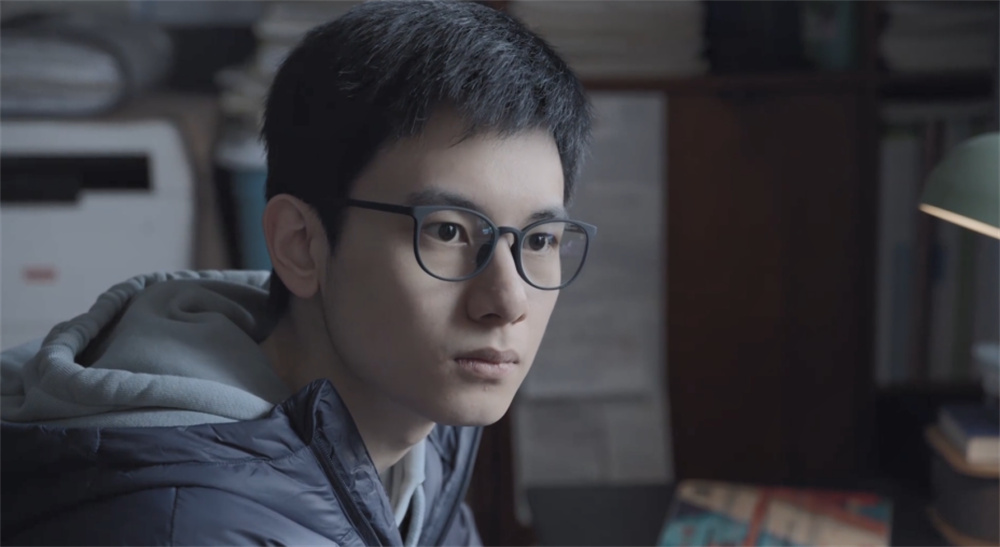 The head of the family is like this. In the audience's expectation, this family is probably full of bitterness and hatred, full of complaints and quarrels. But the "big test" is "anti-routine" to the family's writing, because of Zhou Meiren's "anti-routine". It is true that he has various shortcomings, but if he speaks of advantages, it is that he does not have a pungent "father taste", but is controlled by his son. In his heart, he is very afraid of this scholarly tyrant son. 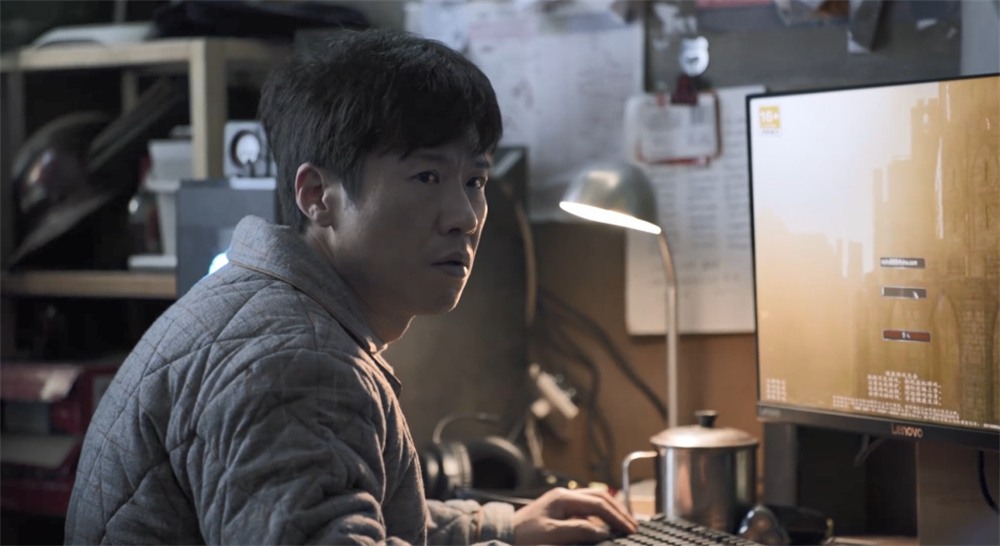 For example, Zhou Bowen claimed to have sold Zhou Meiren's game account. This was Zhou Meiren's lifeblood. Naturally, he was going to get angry and threatened to beat his son. Zhou Bowen was not afraid. He stood up and said that you were fighting. Zhou Meiren immediately cowardly said, "What can't this family say well? It has to be like this... can't you be reasonable?"

Afterwards, Zhou Meiren could only beg his wife and ask her to help him talk. The son didn't appreciate it at all, and Zhou Meiren also used the trump card: If you don't give me an account number, I will trouble your mother. Zhou Bowen is not a vegetarian, so he immediately threatened to delete Zhou Meiren's game account. Zhou Meiren was pinched again, and immediately agreed to his son's request: go to the store to help Zhao Shan for half a month... 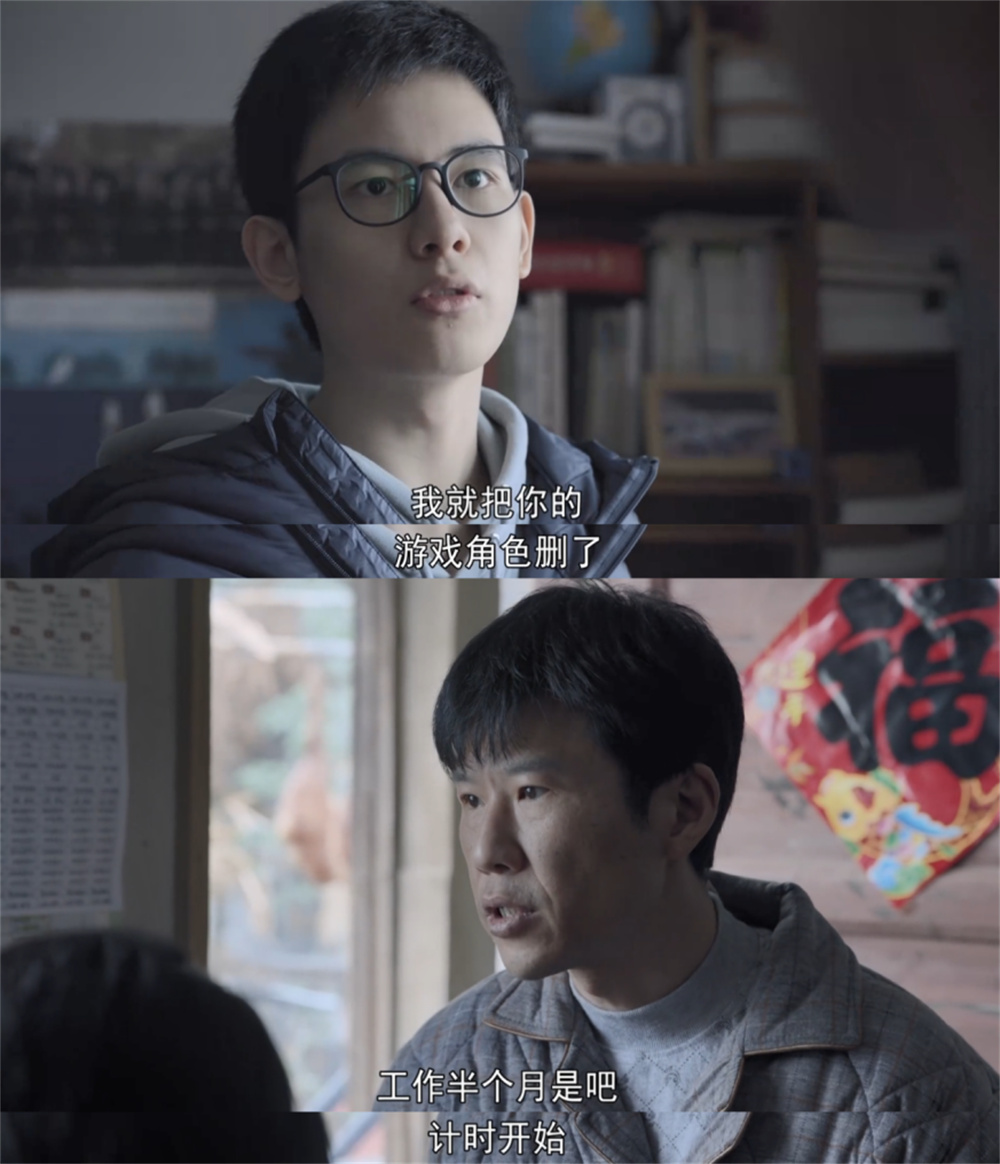 Wang Xiao, who played Zhou Meiren, portrayed the character's fierce and cowardly characters very vividly, which made this originally annoying character show such a cute background. Their warm and interesting daily activities also greatly enhance the visibility of the plot.

Zhou Bowen's friend Wu Jiajun (played by Rong Zishan) is in a very different situation. Mother Dong Bihua (played by Liang Jing) has a strong personality, and she is one of the best in this family. Even Wu Jiajun's father calls her "Brother Hua". Once a strong mother still "hopes her child to become a dragon", the child's life will be even more difficult. This is the case with Wu Jiajun, who is under the control of Dong Bihua. 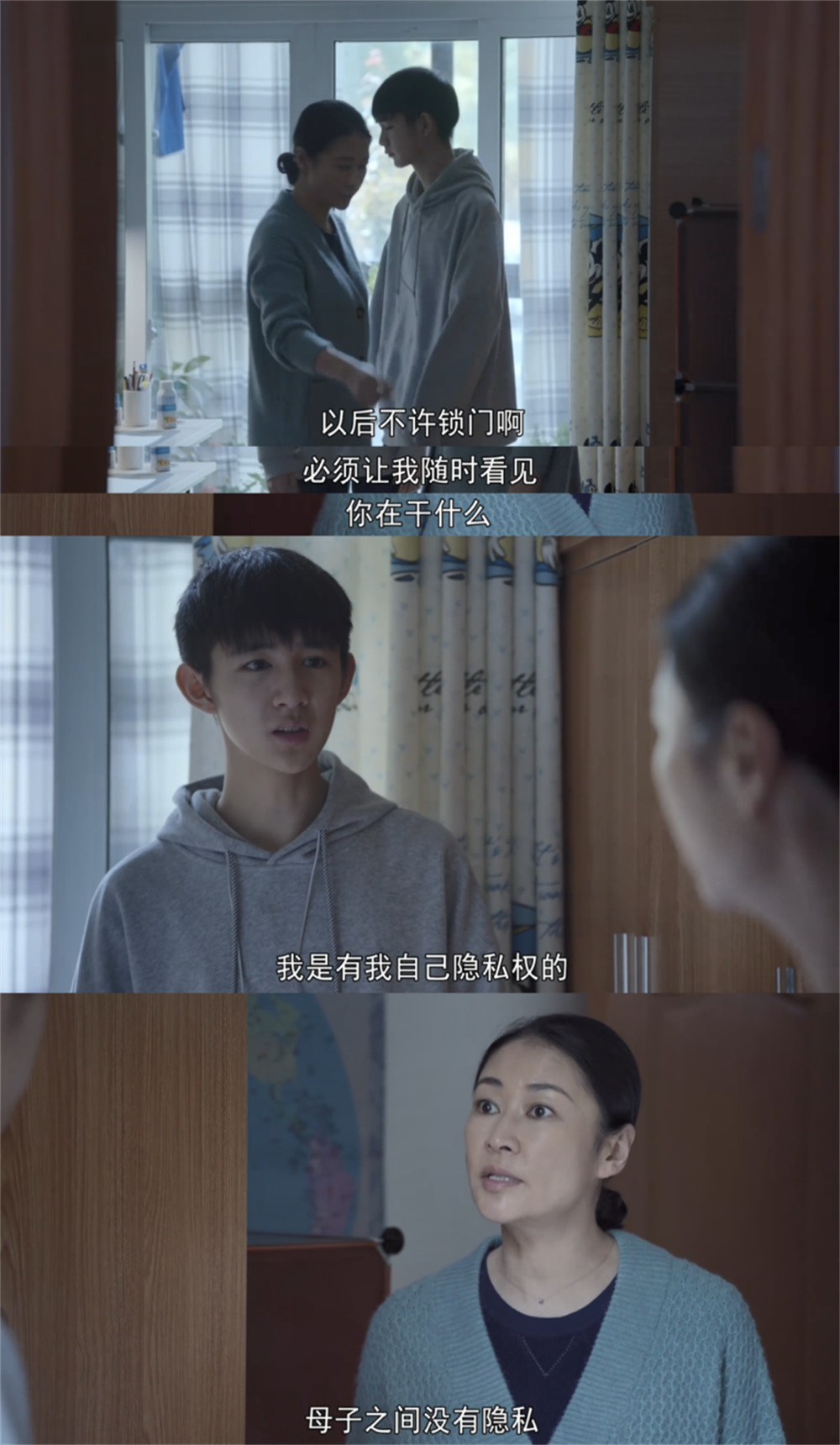 In fact, there have been many movies and TV dramas about such a mother-son relationship, but many of them were stereotypes before, and they were written more routinely. "Routine" wins in many subtle and real details, making the plot more convincing.

For example, Wu Jiajun proposed to Dong Bihua to take an art test, but Dong Bihua strongly opposed it. She asked Wu Jiajun to be admitted to a key university, and he had only this way. When Wu Jiajun said that he had to take the test, Dong Bihua, who was furious, packed Wu Jiajun's luggage and drove him out.

At this point, the emotional reactions of the mother and son were all expected. When Wu Jiajun chose to compromise, Dong Bihua brought cut fruit to Wu Jiajun, patted his head, and asked him to eat the fruit, as if the hoarse quarrel just now had never happened - this is the detail treatment that reflects ingenuity. It was the quick calm after the storm that more and more highlighted Dong Bihua's deep love and loss of control "for your own good", and Wu Jiajun's inability to get rid of the repression and suffocation of control, which also indicated that the peace between the two was only temporary.

Zhou Bowen and Wu Jiajun's respective preparation stories are described in more detail. In addition, Tian Wenwen (played by Li Gengxi), a left-behind college student, Gao Mingyu (played by Xu Yihang), a poor student who lives with his grandfather, and Pan Xiaoxuan (played by Zheng Wei), a rich second generation whose parents have no air traffic control, also have their own troubles. Although there are many characters in the group portrait play, these main high school students left a deep impression on the audience, thanks to the screenwriter who left them with their own highlights, which condensed and accurately reflected their respective situations. 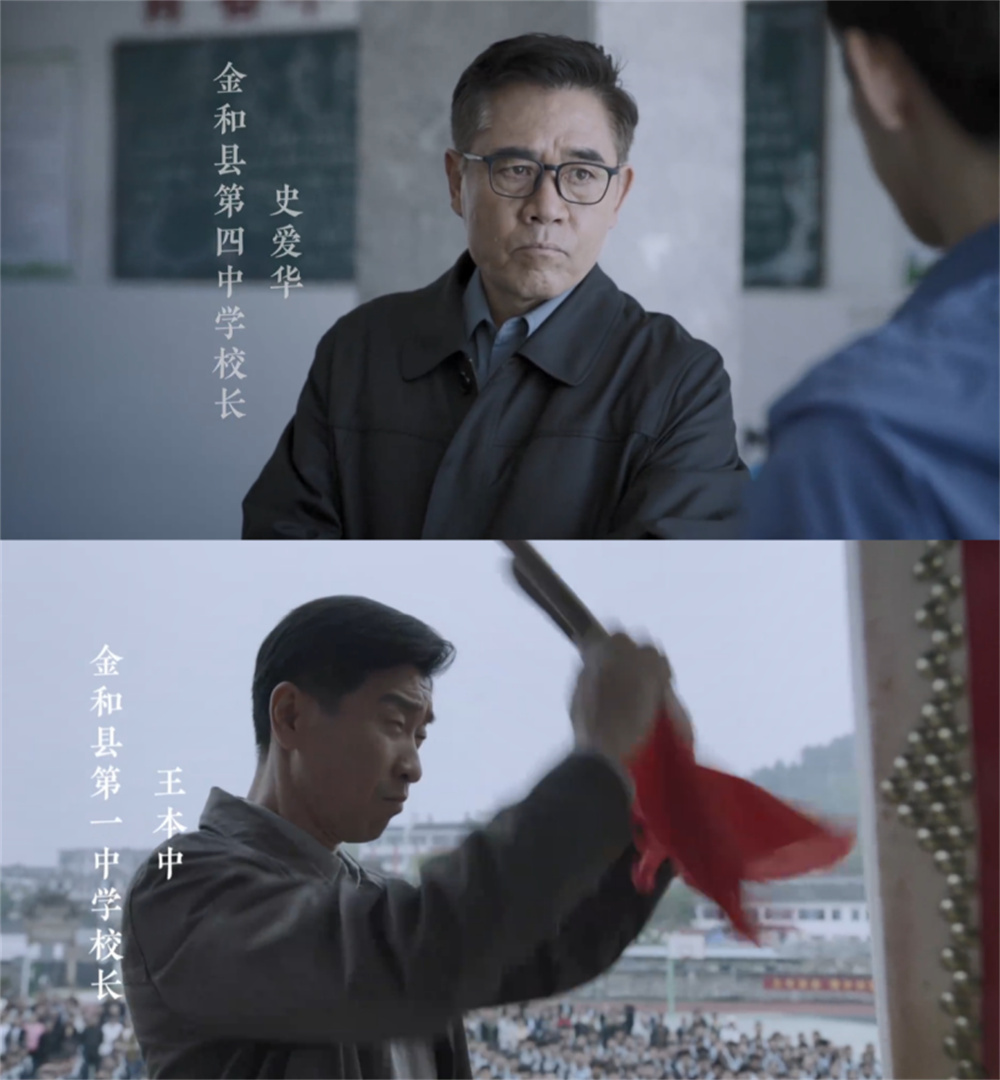 Qin Jianguo, director of the Jinhe County Education Bureau played by Guo Tao, is a mediator between the two principals; as the head of the local education department, he is also responsible for helping the two principals coordinate and deal with the various teaching issues caused by the impact of the epidemic. kind of trouble. The screenwriter didn't shout any big slogans, but still used interesting plots to reflect the characters' characters (such as Qin Jianguo's two "gifts" to the person in charge of the telecommunications company), showing the characters' feelings for the public.

Therefore, regardless of the big test of the epidemic, the big test of the "big test" itself is a quite exciting youth group portrait, focusing on the family, friendship and teacher-student relationship of a group of senior high school students. Although the college entrance examination brings people a sense of pressure and urgency, the background color of the plot is lively, warm, interesting, quite fascinating, and gives the audience a positive, healing and upward emotional touch.

On this basis, "Da Kao" skillfully combines the college entrance examination with the era's big test under the epidemic to form an echo and intertextuality. Although it is a grand theme expression, its entry point is very daily; the light narrative style forms a neutralization with the heaviness of the epidemic; it is not just a slogan, but reflects the human brilliance of the backbone of the times in various details... To the end , students have completed the big test of life, and the era has completed a difficult and huge test. "The Big Test" also completed its big test well, providing new ideas for the creation of the main melody.